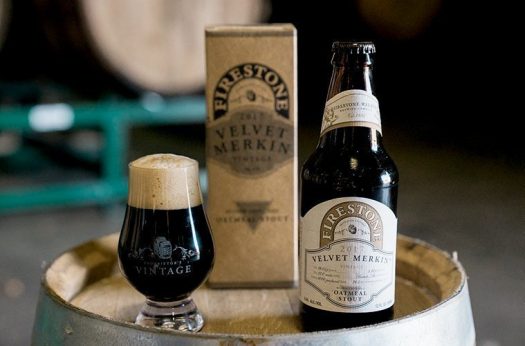 Firestone Walker is nothing if not creative with the names for their beers, especially when it comes to the much sought after Proprietor’s Vintage Series, which includes such gems as Helldorado and Sucaba (Abacus spelled backwards). Perhaps the most unique and risqué, however, is the Velvet Merkin Oatmeal Stout. What is a Velvet Merkin you ask? Since we’re a family-friendly drinking site, I’ll just recommend you Google it. Maybe not at work. Or at home, for that matter. Anyway, I’ve been cellar aging my 2017 edition of this scandalously-named brew, and with the weather turning cold, I thought now would be a great time to crack into it.

First, some quick vitals on this one. This stout was brewed with fuggle hops and includes maris otter, 2-row pale, roast barley, English dark caramel, medium caramel, and carafa malts. The final product is aged for a full year in retired bourbon barrels from the likes of Heaven Hill, Woodford Reserve, and others.

The beer pours a dark chocolate color with a very light cola-hued head. For a barrel-aged beer, the nose is only lightly boozy with plenty of vanilla and chocolate fudge overtaking the usual alcohol. There’s also a great toasted pecan note here and a little dark roast coffee. It has a lighter mouthfeel than I’m used to with most stouts. There’s also minimal sweetness on the palate, which showcases instead a host of roasted and malty flavors that make the overall experience almost savory. Oak and unsweetened coconut, both toasted, carry the mid-palate alongside dark chocolate and coffee beans. The bourbon barrel is there in its subtle vanilla and caramel undertones, but woodier and nuttier notes really dominate. The finish is a tad short, leaving only trace notes of baking chocolate and bitter coffee. While still enjoyable, a little more sweetness and nuance from the barrel would really elevate this one.