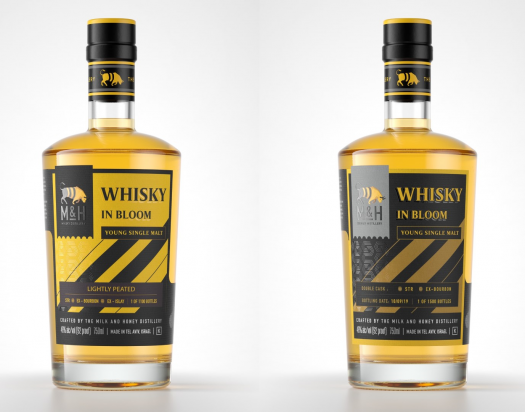 Need further proof that whiskey is taking over the world? Witness M&H — aka Milk & Honey — the first and so far only whisky distillery in Israel.

M&H broke ground in 2014, and the launch was overseen by veteran distilling consultant Jim Swan, who has been part of Kilchoman, Kavalan, Amrut, and many other world whiskey operations. M&H was his final project before recently passing away.

M&H makes whisky in the style of Scotch, one of which even includes peat in the recipe. To start with, two expressions are available — as well as two gins, not reviewed here — each quite different from the other.

We received samples of both to review, both single malts — and kosher — bottled without an age statement. Both are 92 proof. Let’s dig in!

M&H Whisky in Bloom Double Cask – Aged in a combination of ex-bourbon casks and ex-red wine STR casks (Swan’s trademark process of shaving, toasting, and re-charring). The whisky is surprisingly fully-formed, though it’s clearly the bourbon barrel that has had its way here. The nose is quite malty and soothing but sharp at times with notes of black pepper and some ruddy green bell pepper, too. The palate is equally simple, leaning heavily on the cereal notes but finding room for some interesting components in the form of Butterfinger candy, lemon peel, and a gentle note of forest floor. The finish has the slightest lick of sweetness, but is otherwise informed largely by notes of fresh wood. Fun stuff. B+ / $45

M&H Whisky in Bloom Lightly Peated – The whisky isn’t peated, but one of the three types of casks is: ex-bourbon, ex-red wine STR, and ex-Islay casks used to mature peated Scotch. Essentially this is the Double Cask above, plus some peat. The influence is immediate, a smoky maritime quality on the nose that immediately connotes Islay, though it feels aromatically quite mild compared to a real Islay experience. There’s a light chocolate note and some of that pepper evident, as well. On the palate, there’s more peat than expected, but again less than Islay Scotch. It’s a straightforward whisky, toasty with both peat and wood, and quite sweet on the back end with notes of fresh berries and a slight reprise of chocolate on the finish. B+ / $45