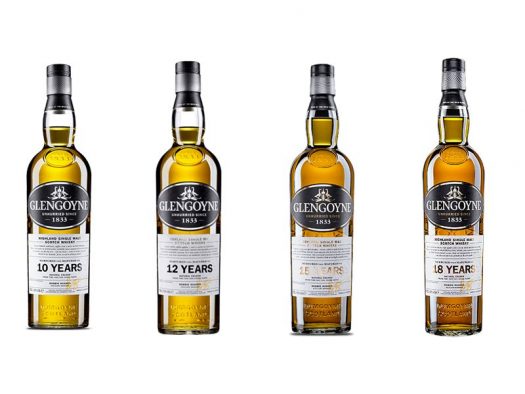 We have not enjoyed the privilege of a proper deep dive into the lineup of Glasgow’s Glengoyne in a decade. As such, with the assistance of some friends, we culled together a sample set and went about with a re-visitation of their core range, circa 2020. The results were as enjoyable, consistent, and eclectic as a performance from Glaswegian local music legends JD Twitch and Johnnie Wilkes.

All expressions are 86 proof.

Glengoyne 10 Years Old (2020) – Loads of green apples on the nose, with a bit of sawdust, malt and toffee. Letting it sit in the glass for a bit of time helps to balance out the initial abrasiveness. More candied apple sweetness with some black pepper and toffee on the palate. Things improve on the finish, where the apple notes finally give it a rest, letting the oak give a clean and mildly appealing finish to an otherwise erratic dram. Chris rated this a B- in 2010. The song remains the same. B- / $45

Glengoyne 12 Years Old – A marked improvement over the 10 year old. The apple notes remain present and accounted for on the nose, but there’s a honeyed sweetness present, absent on the 10 year, that is most appealing after adding a few drops of water. The palate delivers on the promise of the nose with lots of vanilla and oak notes transitioning to a long, lingering finish resembling a generous slice of tiramisu and shredded coconut. B / $50 [BUY IT NOW FROM CASKERS]

Glengoyne 15 Years Old – Both the 15 and 12 year have an inviting sweetness to them, but with one contrast: while the 12 year is more tropical, the 15 year is very grain-sweetened. Loads of butterscotch and cereal notes on the nose, and with a little bit of time in the glass and a few drops of water, a bit of brown sugar. There’s a mild hint of lemon on the palate, but dark chocolate, oak, and cinnamon steal the show. The oak and cereal malt notes hang around for a lingering finish. One heck of a good time at a reasonable price. A- / $75 [BUY IT NOW FROM CASKERS]

Glengoyne 18 Years Old – The first-fill sherry cask influence is evident right from the nose, with a little bit of green apple, pineapple, and vanilla showing. Very pronounced notes of hazelnut, clove and oak strike the palate, making for a surprising turn of events from the sweetness on the nose. A pleasant, spicy finish keeps the oak around for a bit, but cloves and a bit of cinnamon are in it for the long haul. Very complex and flavorful and a welcome transition from the more youthful expressions. B+ / $140 [BUY IT NOW FROM CASKERS]